Sarah Cornwell is a native of Philadelphia, PA where she began dancing at the age of 9. She trained at the Gwendolyn Bye Dance Center in the Vaganova and Graham techniques, as well as various styles of jazz and hip hop. She received her 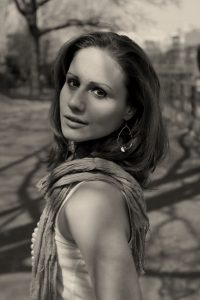 B.F.A. From NYU’s Tisch School of the Arts where she had the great honor to work with former and current company members of Merce Cunningham, The Martha Graham Dance Company, the Bill T. Jones/Arnie Zane Company, Complexions Contemporary Ballet, Ronald K. Brown/EVIDENCE, Dance Theater of Harlem, and the Mark Morris Dance Group, among others. She has performed with companies and choreographers both in New York and Philadelphia, and she has performed her own work internationally in Vietnam and Austria. Sarah also has a Master’s in International Humanitarian Assistance from Uppsala Universitet where she focused on the role of the arts in cultural diplomacy and conflict resolution. Sarah loves to unfold the immense power and beauty of dance to children of all ages and has taught in Philadelphia as well as Northern Ireland.